A meeting was held on August 9, 1901, in the office of Harry E. Mason for the purpose of establishing a new bank. After meeting the requirements of the Territory of Oklahoma Banking Department, Alva State Bank received its Certificate of Authority on September 7, 1901. Harry Mason established this new bank in 1901 with the aim and purpose of

On November 1, 1957, C.W. Wisdom purchased controlling interest in Alva State Bank and served as its president from January 1958 until his death on September 3, 1993. The Wisdom Family continues to play an active and vital role in the leadership and direction of Alva State Bank & Trust Company.

Alva State Bank & Trust Company and the Wisdom Family are very proud to have been a part of the growth and progress of the communties we serve in Northwest Oklahoma and Southern Kansas. Alva State Bank continues to stay grounded in the founding principals set forth by Harry Mason in 1901. We have proudly branched out to more areas over the years by planting roots in the communities we serve, focusing on lasting relationships and enhancing the success of the people in those communities. The directors, officers, and staff wish to thank our loyal customers and friends for your support over the past 100 years.

Our Current Board Members

Historic Pictures Courtesy of The Cherokee Strip Museum of Alva 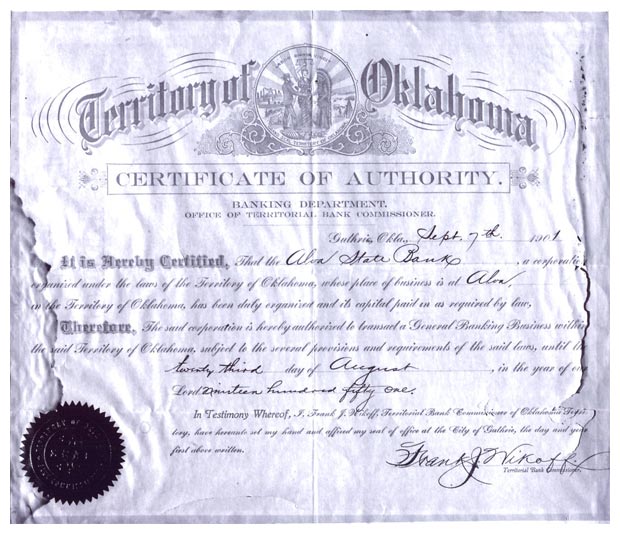 This is Alva State Bank’s Original Certificate of Authority, from the Banking Department, dated September 7, 1901 in Guthrie Oklahoma. This document states; It is Hereby Certified that Alva State Bank, a corporation organized under the laws of the Territory of Oklahoma, whose place of business is at Alva in the Territory of Oklahoma, subject to several provisions and requirements of the said laws until the 23rd day of August, in the year of 1951. In the Testimony Whereof, I, Frank J. Wykoff, Territorial Bank Commissioner of Oklahoma Territory, have hereunto set my hand and offered my seal of office at the City of Guthrie, the day and year first above written. Signed Frank J, Wykoff, Territorial Bank Commissioner. 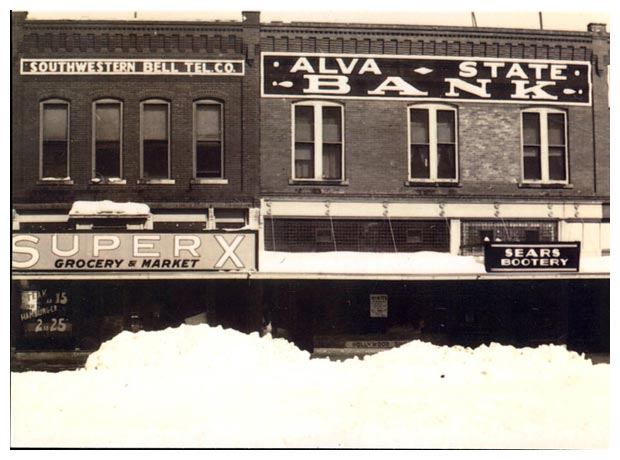 This was the location of Alva State Bank during the 1950’s. As you can see, Alva had just been struck by a significant snowstorm, blocking access to the bank and local grocery store

This is the view facing west of Alva’s downtown, probably before 1901. 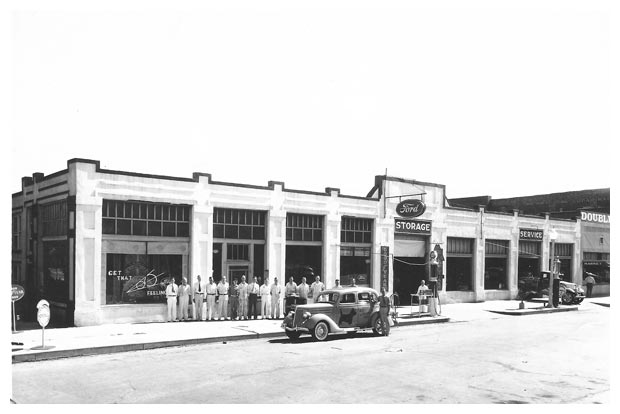 Alva’s Ford Garage around 1935. The Scotty Dog Emblem on the side of the Ford is saying, “Aye, and Thrifty Too!”. This dealership was located on the corner of 7th and Flynn, where Lehr’s Muffler Shop is today. 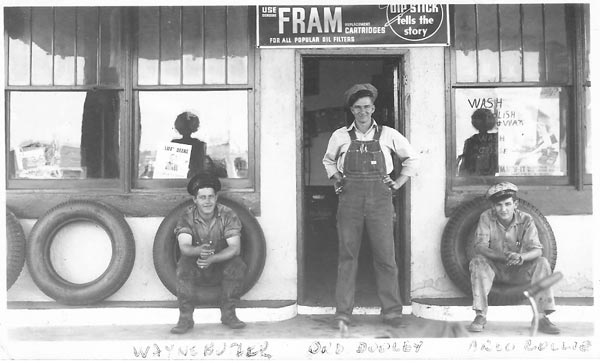 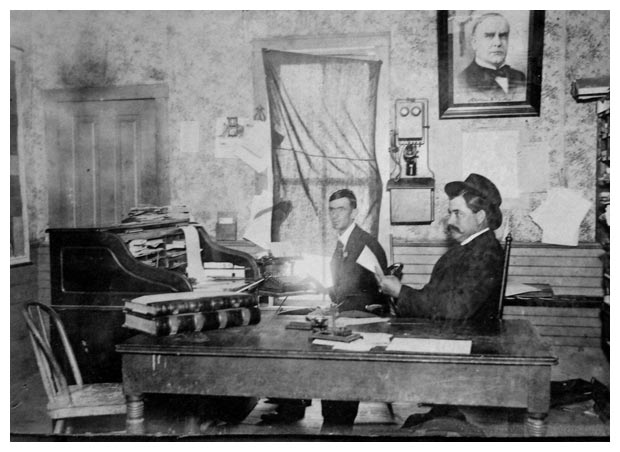 Sheriff D.C. Oates examines a paper in Alva’s Sheriff’s office. The other man is unknown. Notice the picture of President McKinley on the wall above. Sheriff Oates served as Sergeant at Arms at the Territorial Convention and later became assistant warden at the penitentiary in McAlester, where he lost his life in a prison break. 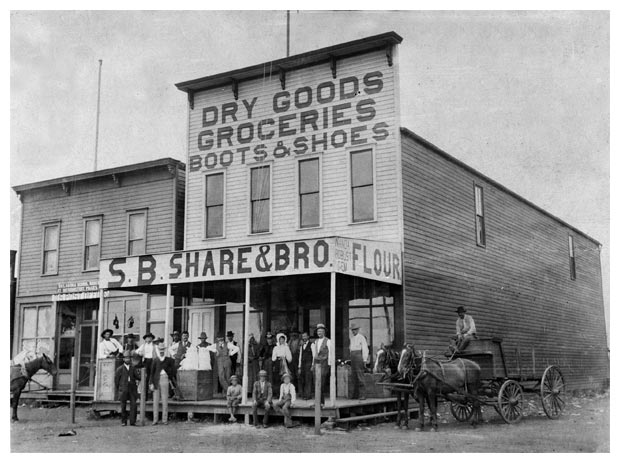 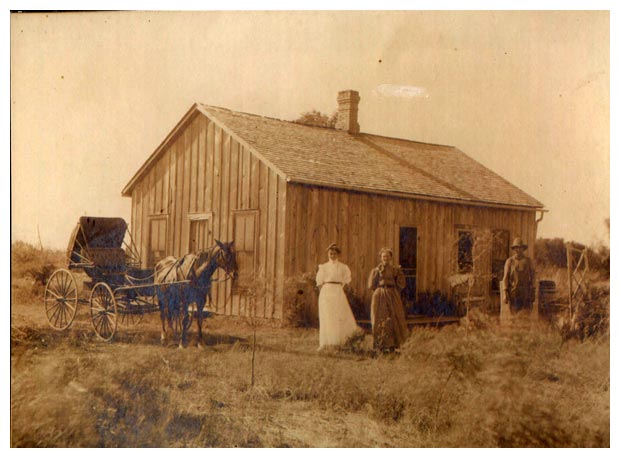 J.M Snapp, known as Matt, to friends and family, brought this house from Christfield, Kansas to his claim near Ingersoll in the early 1900’s. The family line continues right down to an Alva State Bank employee, Vilene (London) Hansen. Matt was Vilene’s Great-Grandfather, and a civil war veteran. Alva State is proud to be Older than Oklahoma, serving this area since 1901. 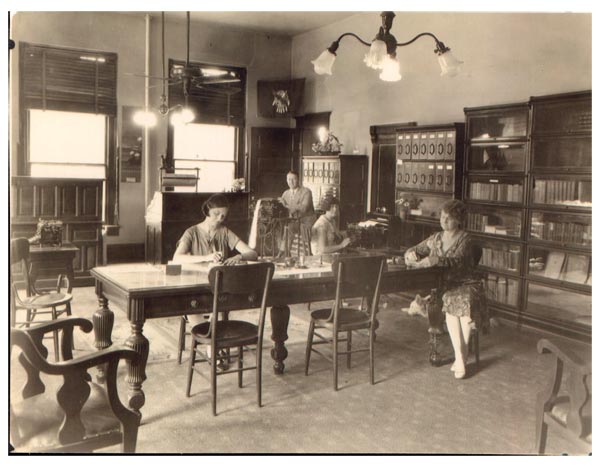 This picture was taken of an Alva Office in 1929. 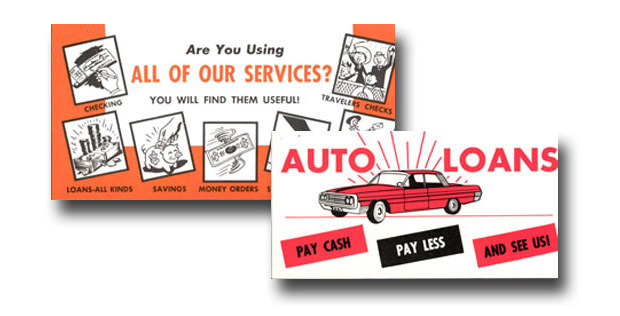 These advertisements were placed in Alva State Bank’s Customer Statements in the 1970’s. They still apply to our banking services today!

This is the East side of Alva probably before 1900. The Runnymede Hotel is at the far left on the corner of Fourth and Flynn. Visit Alva today to see this recently remodeled historic building!

This is a picture of Alva facing west at the corner of 5th and Choctaw in front of ‘Mathew’s Garage’. Today the building is Arlo Collie’s filling station. 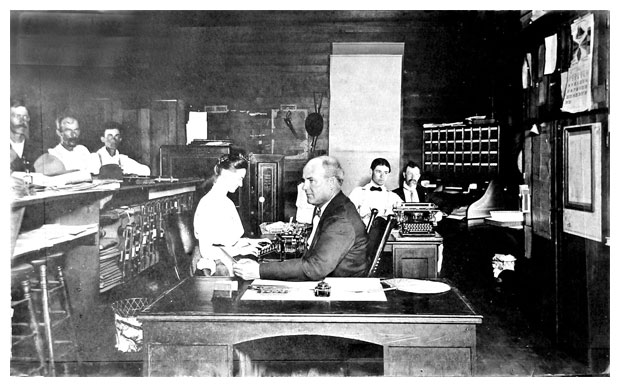 The Alva Land Office in 1902 is busy with Miss Saure at the typewriter; A.R. Museller, resgistrar; Irving Stoner with the bowtie; and Mr. W.H. Cofield, receiver. 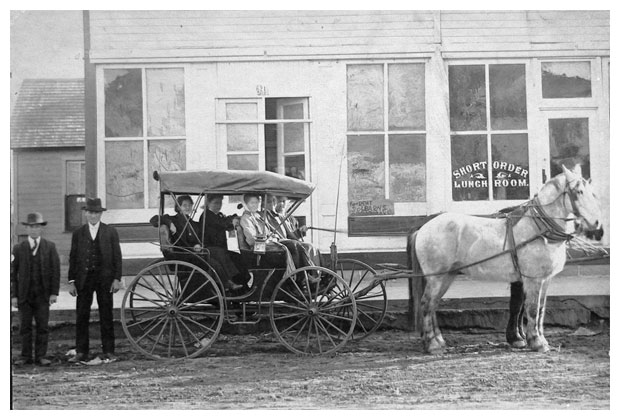 It is not known what lunchroom this is, but several visual clues indicate that it was on the south side of the Barnes Street in Alva, just west of the College and Barnes intersection. 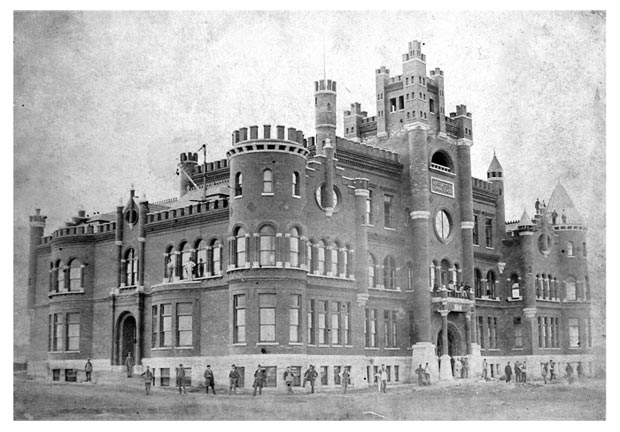 Alva is home to Northwestern Oklahoma State University (NWOSU), founded in 1897 as a “normal school”. The college’s main building for a time was the “Castle on the Hill” a huge, fanciful brick building that towered over much of the town. The Castle burned down in 1935, to be replaced by the more staid Jesse Dunn Hall, which was dedicated in 1937 by Eleanor Roosevelt. 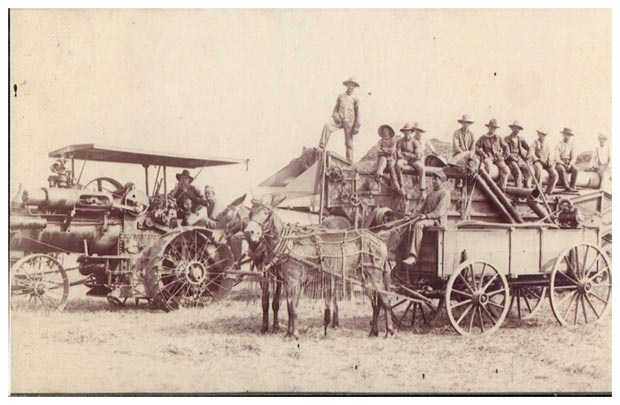 This harvest picture was taken near the turn of the century near Avard, Oklahoma. Notice the device the horse is wearing. This helped to ward of flies and other bothersome insects. 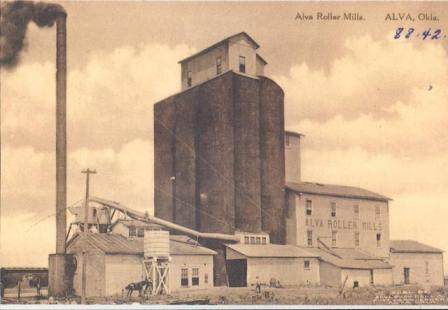 This is a picture of the Alva Roller Mills during the early 1900s.

Alva State Bank would like to thank the Cherokee Strip Museum of Alva for allowing us to borrow and share these Historical Pictures of Northwest Oklahoma. 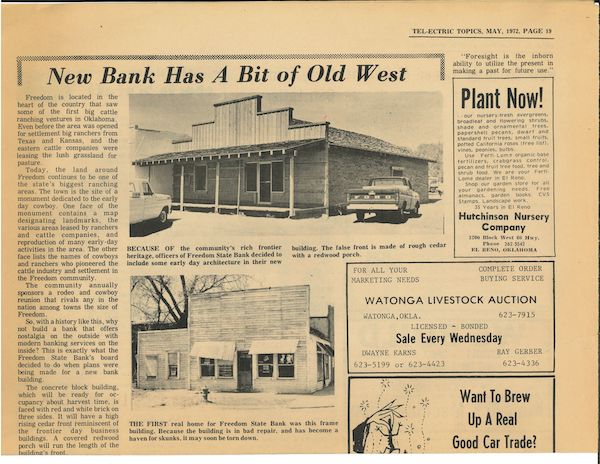 The History of the Freedom State Bank

Nearly 100 years ago, three enterprising men saw opportunity in a location where others probably saw nothing at all … except a beautiful and unique surrounding landscape.  The place was a tiny new town taking shape along the banks of the Cimarron River amid towering gypsum bluffs in northwest Oklahoma.  The men were David Powers, a banker and general store merchant living in Quinlan, Oklahoma, George Harbrough, a grain dealer in Alva, Oklahoma, and C.Q. Chandler, a banker from Wichita, Kansas.

The town of Freedom had actually sprung up from the prairie just a few years earlier at a site five miles north of its present location.  But when a railroad linking two neighboring towns was completed in the year 1918, Freedom’s residents literally packed up their town and moved it by wagon to the railroad.

David Powers came to Oklahoma from Pleasant Hill, Missouri at the opening of the Cherokee Strip and settled with his family on a homestead near Quinlan, Oklahoma.  He was later instrumental in the founding of a bank in Quinlan and another in nearby Seiling, Oklahoma.

In January of 1919, the three gentlemen secured a charter and The Freedom State Bank was founded.  Banking business was initially conducted from a front office of the Starr & Cable Lumber Company, a business founded by another Freedom pioneer, Ben Cable, while a stand-alone bank building was being built.  Dave Powers lived upstairs above the lumberyard and bank offices and ran the bank during the week.  He spent weekends in Woodward, Oklahoma with his wife and seven children because, at that time, there was no bridge spanning the Cimarron River and there was no high school in Freedom.  By 1922, that had changed and Dave built a new home for his family in the growing community of Freedom.

During the years of the Great Depression, times were extremely hard in northwest Oklahoma.  Dave was President of the bank and earned $100 a month.  His son, Jim Powers, worked with him and earned $50 a month.  Dave Powers became interested in politics and in 1926 he was elected to the Oklahoma State Senate and served until 1934.  This left Jim Powers and long-time employee, Harry Bocock to run the bank.  Harry later moved to Alva, Oklahoma leaving the bank with just two employees, Dave and Jim.  Jim had started buying into the bank two years earlier.  In 1934, Dave Powers died when a failing health condition suddenly worsened.  Jim Powers became President of the bank.

In 1936, Jim Powers married JoAnna Nixon who joined him in the bank along with her brother, Wesley Nixon.  Like his father, Jim also had an interest in politics, and in 1938, he was elected to the Oklahoma House of Representatives.  During Jim’s two terms in the House, his brother, Bill Powers, his wife, JoAnna Nixon Powers and his brother-in-law, Wesley Nixon, worked the bank. But in 1942, Wesley and Bill were both drafted into military service.  Rather than seek re-election to the House, Jim returned to Freedom to run the bank.  When the war was over, Wesley also returned to the bank.

In 1954, Jim Powers was named Oklahoma State Director of the United States Department of Agriculture and the Farm Home Administration.  Wesley Nixon was then made President of the bank at 35 years of age.

In 1972, the Directors of the bank gave the small town of Freedom a vote of confidence by building a new building at its current location and letting people know that they had faith in the future prosperity of the Freedom community.  It was at this time that Cashier, Gunter Smith, and Wesley Nixon conceived the idea of constructing an “old west” façade on the front of the new bank building.  In the span of a few short years, the entire Main Street of Freedom took on the look of an “old west” cow town.  The scene still inspires newcomers and visitors to this day.

The Bank of Freedom is located in the heartland of America, but the principles that motivate our way of doing business are about as far away from “Wall Street” as one can get.  The Bank of Freedom is a branch for people who want to “know” their banker.  We believe in time-honored business principals with a forward-thinking approach.  These days, that includes a rather new idea in banking … Genuine old-fashioned SERVICE … along with honest care and concern for our customers near and far.

First State Bank of Kiowa has been the "Corner Stone" of Kiowa since 1935.

The First State Bank, Kiowa, Kansas was originally chartered in 1935. The first Board of Directors were;  C.E. Harmon, C.H. McBrayer, G.W. Lindley, J.H. Stairs and Floyd Clark.  In 1938, L.W. Stevens and Clarke C. McIlree purchased stock in the bank.

Serving Our Customers Since 1901

We’ve been right down the road for over a century.

Our History Our Community